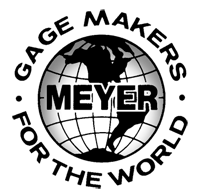 Why Gages Can Grow In Dimension

Hardened steel does have the propensity to grow in dimension.

The growth is usually noticed in larger sizes because it is an inch per inch type growth. What happens is when the steel is hardened the molecules are trapped in stasis. Slowly the molecules relax and retained austenite is changed to martensite, as they relax they cause an expansion of the material. The gradual relaxation process takes about a year. The larger the size the more the change is noticed. The tighter the tolerance the more the movement is noticed.

To combat this phenomenon gage makers require that their hardened steel be triple cold stabilized. The process requires the gage to be cycled three times through a freeze/thaw process. This procedure will reduce the probability of gage growth. Note the use of the word ‘reduce’ instead of ‘eliminate’.  This a major reason to have gages calibrated on an annual basis even if they have been subjected to little or no use.

The probability of growth is most likely noticeable when:

Chips
The machining process may leave material chips in the threaded hole. If these chips are not removed they may weld themselves to the gage surface or get caught in the root of the gage thread. The fix for this is simply to remove the chips. OK, it is not always simple to remove them but it must be done to extend the life of the gage.

Burrs
These are pieces of material still attached to the work piece but protruding into the machined space left after cutting the thread. Not removed they may weld themselves to the gage surface. If burrs are a problem a different style cutting tool, a second pass with the cutting tool, different speeds or feeds or just a wire brushing may solve the problem.